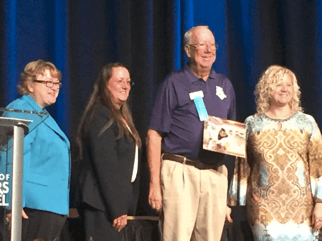 The Culligan City of Palms Classic is honored to be the recipient of the 2016 Chrysalis Award in the sports category. This prestigious honor was presented to the tournament on Friday, May 20 at the Celebration of Business & Tourism Awards Luncheon and Trade Show held at the Harborside Event Center in downtown Fort Myers.

The recognition comes as the Culligan City of Palms Classic, which is widely regarded as the premier boys’ high school basketball tournament in the U.S., prepares for its 44th year. After 22 years of being hosted by Bishop Verot Catholic High School, the tournament is moving to the new 3,300-seat Suncoast Credit Union Arena on the campus of Florida SouthWestern State College in Fort Myers. The Classic, which will run December 16 through 21, 2016, is responsible for 2,000 room nights a year in local hotels and $200,000 in direct spending by traveling players, coaches, families, media reps and support staff.

The Chrysalis Award signifies the development of a partnership between the business and tourism communities and is co-produced by the Greater Fort Myers Chamber of Commerce and the Lee County Visitor and Convention Bureau. It is held to commemorate National Travel and Tourism Week. This collaboration is intended to create stronger resources for the good of our diverse communities and destination. Awards are given in six categories: business development, eco-innovation, cultural achievement, sports, education, and sales and marketing.

The organization honored in the sports category exemplifies the ability to make significant contributions to the development of Lee County’s sports and recreation industry and reputation as a healthy, physically active, sporting destination.

Culligan City of Palms Classic Executive Director John Naylor said, “TheChrysalis Award is a tremendous honor. As we get ready to move into the Suncoast Credit Union Arena, we look forward to continuing to be ambassadors for the business and tourism communities in Southwest Florida.”

No fees are collected from players and teams, and Classic Basketball Inc., a 501(c)3 not-for-profit corporation that acts as a foundation for the tournament, covers all expenses for the players. For many of the players, the tournament represents their first opportunity to travel outside their own city.

More than 530 Culligan City of Palms players have advanced to NCAA Division I competition, 67 who played in last year’s NCAA tournament. Nearly 100 have been drafted into the NBA, with 51 currently playing in the NBA. Hundreds of coaches and scouts at every level use this venue for recruiting.

About the Culligan City of Palms Classic

The City of Palms tournament began, like so many tournaments today, as a simple, local, holiday basketball tournament. Since its founding in 1973, the tournament grew and expanded its scope to include the nation’s finest athletes and teams, and has set the standard by which all tournaments are compared. Classic Basketball Inc. is a 501(c)3 not-for-profit corporation created for the purpose of managing the Culligan City of Palms Classic. For more information and to sign up for the eNewsletter, visit cityofpalmsclassic.com.