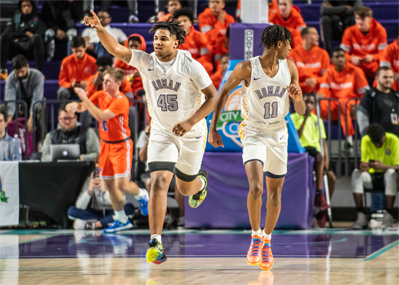 Four powerhouse teams hoping to make their way through the bracket

To some, the Culligan City of Palms Classic has become the Montverde Academy Tournament. With four championship trophies in the last eight years, the Eagles once again will come to Fort Myers with a great chance to walk away with the title, just as they did in 2019. It’s no wonder Monteverde (Monteverde, Fla.) is favored to repeat, with five of the top 40 seniors in the nation, according to Rivals.com, including No. 6 Dariq Whitehead and No. 15 Skyy Clark.

However, 15 other teams, including three very strong contenders, are hoping to knock off the defending champs in the main bracket of the tournament. IMG Academy (Bradenton, Fla.), Oak Hill Academy (Mouth of Wilson, Va.) and Milton High School (Alpharetta, Ga.) are likely to give Montverde a run for their money.

IMG Academy was runner-up to Montverde in 2019 and this year they’ll bring in another powerful squad featuring five of the nation’s top 40 seniors, including recent transfer No. 7 Keyonte George, No. 9 Jarace Walker, No. 18 Jaden Bradley, No. 23 Eric Dailey, Jr. and No. 40 Jett Howard.

Coach Steve Smith brings his legendary Oak Hill Academy program to COP for the second time in the past four years with high expectations. Coming off a less than stellar 2020 season, the Warriors hope to rebound this year. Oak Hill Academy is led by 6-3 junior Caleb Foster, who averaged nearly 14 points per game last season, and new transfer 6-6 senior Chris Livingston from Akron Buchtel, who averaged more than 31 points per game and nearly 16 rebounds per game last season.

Milton High School returns to the Culligan City of Palms Classic coming off a state championship in Georgia. The team that nearly shocked IMG in the Geico Nationals in Fort Myers back in April returns virtually intact for the upcoming season. Led by No. 20 ranked prospect and Ohio State commit Bruce Thornton, the Eagles continue to make a name for themselves on a national stage. Coach Allen Whitehart’s squad also includes 6-7 senior Kendall Campbell and 264-pound brute, 6-3 junior L.T. Overton, the consensus No. 1 football player in the nation in the class of 2023.