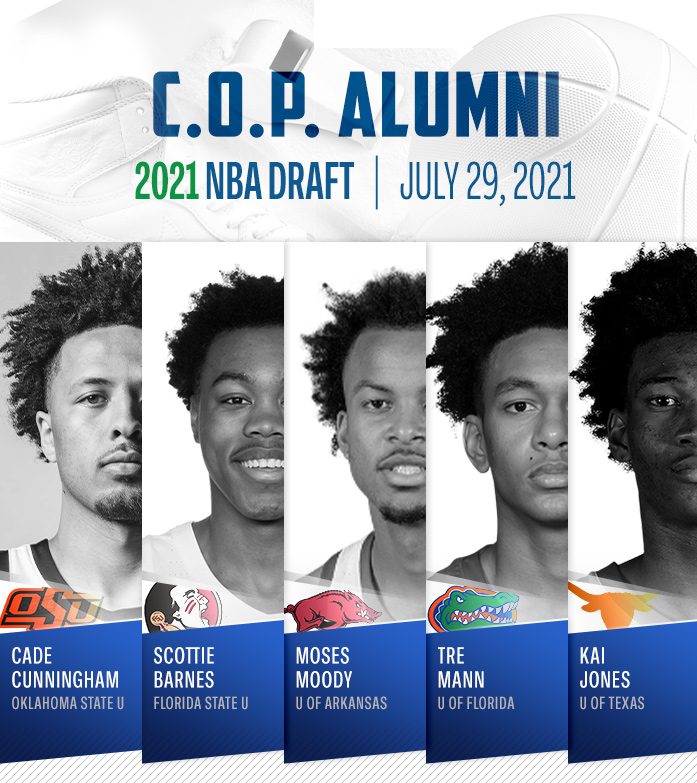 To many involved with the 2021 NBA Draft, it was 60 picks that represent future greatness for their respective teams. For the team at Classic Basketball, Inc., July 29 was a record-setting night as 18 Culligan City of Palms Classic alum were chosen to play at the next level, including No. 1 pick Cade Cunningham who appeared here in 2019 for Montverde Academy. Cunningham will suit up for the Detroit Pistons.

Another lottery pick from the 2019 COP was Scottie Barnes. Barnes, who went No. 4 to the Toronto Raptors, was Cunningham’s teammate on the national champion and COP champion Montverde Academy squad. Barnes was also a two-time COP MVP, having played in the tournament three times during his high school career.

Other notable NBA Draft picks that made a name for themselves on the Suncoast Credit Union Arena court include:

No. 48 Sharife Cooper, who led McEachern High School to the COP title back in 2018; No. 52 Luka Garza, the NCAA National Player of the Year for 2020-21, who played here in 2016 with Maret School; and No. 56 Scottie Lewis, who took home the Edison National Bank Slam Dunk championship back in 2018 when he was here with the Ranney School.

Overall, a whopping 28% of this year’s NBA Draft picks have played in the Culligan City of Palms Classic at least once, with eight going in the first round this year, nine in the second round and 108 in total getting drafted since COP began 48 years ago.  Check out the full list of Culligan City of Palms Classic alumni who were selected in this year’s NBA Draft: